PointBank is the leading community bank in Denton County because each and every one of our employees is focused on giving back in as many ways as possible. We invest in local businesses, churches, schools and neighboring charities, and by doing so, we keep more local dollars in our community – where that money belongs. Continue reading below to hear all about our latest achievements, news from the banking industry and local economy, upcoming events near you, and special announcements from our local branches. 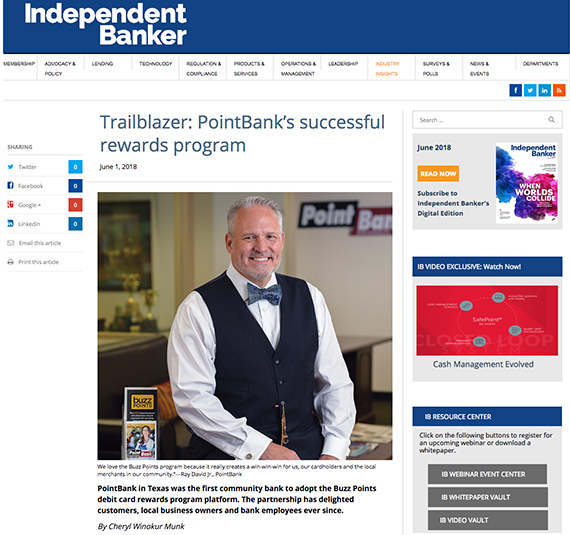 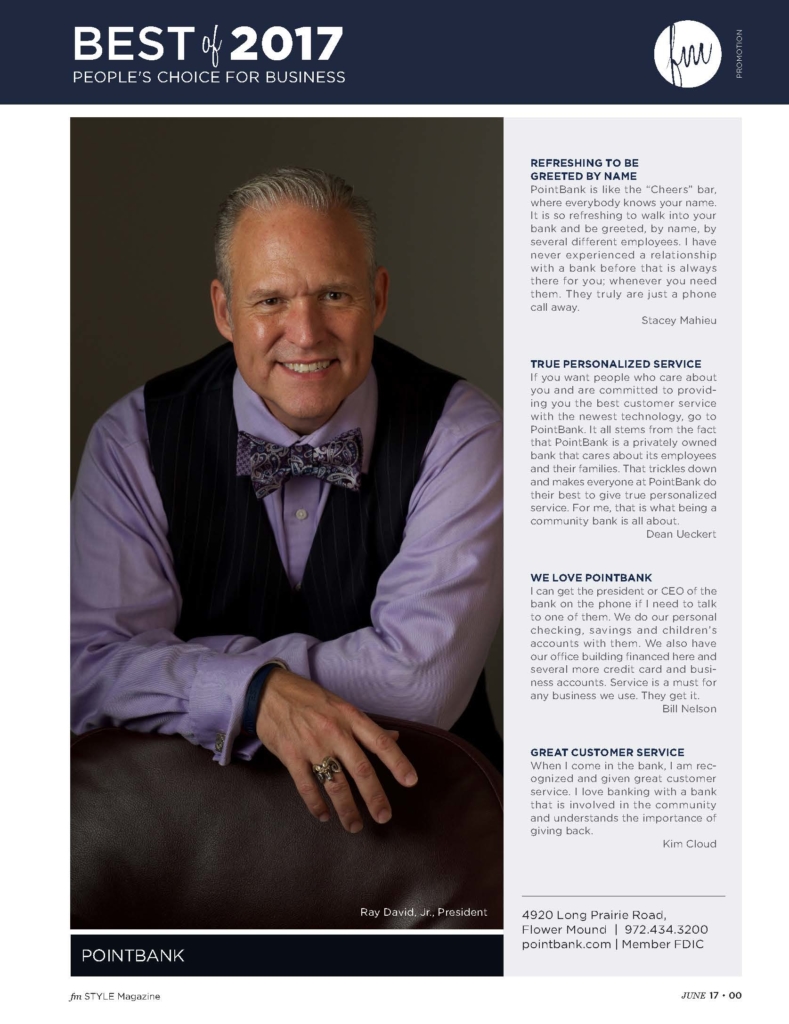 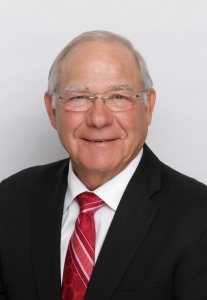 PointBank CEO J. Raymond David Sr. began his banking career in 1962 as a bookkeeper for First State Bank in Denton. It was clear very early on that David – a college student at the time – wanted to learn every nook and cranny of the industry, and by the time he left 14 years later, he had worked in nearly every department that bank had to offer.

Mr. David still is very hands on in what has become nearly a lifetime in banking. He is the enduring face of Denton County’s oldest community bank, and in March marked his 50th anniversary in banking.

But as far as David is concerned, that’s not an invitation to slow down.

“I’ve always said that so long as the good Lord gives me a strong mind that keeps me from messing things up, I will be here,” said David, who is 74. “I have no intentions of retiring. I still love coming to work every day.”

With the exception of a short stint in the restaurant business, banking is all David has every really known – and loved. After leaving First State Bank of Denton in 1976, he spent four years working in management for Grandy’s restaurants before leaving there in 1980 to open an Orange Julius restaurant that same year.

The lure of banking continued to call, however, and on March 9, 1981, he succeeded Ralph Burton as the President of Pilot Point National Bank. That community bank is now known as PointBank.

Over the last 36 years, David, and eventually his sons Ray David Jr. and Jonathan David, have helped grow PointBank from a single-location bank of around $18 million in assets to roughly $475 million today. That has included the addition of eight more locations in Aubrey, Argyle, Denton (two locations), Lake Cities, Lewisville, Little Elm and Flower Mound.

David’s love for banking has created a culture at PointBank that has allowed him and his employees to be stewards of the community while continuing to buck the trend of the stodgy and impersonal style that tends to dominate most too-big-to-fail banks. There are still long-term customers who seek out Raymond in person, or call him directly on his cell phone. And employees feel comfortable simply calling him Raymond when they see him in the branches.

The goal is to treat every customer like the only customer, and that mentality has thrived despite an ever-changing financial landscape. If you talk to David, it’s clear how dedicated he is to his customers, employees and the community.

“You want people to come in and feel warm and welcome,” David said. “Banking has changed dramatically over the last 50 years, but the thing that makes me most proud is that we have always been about customer service and serving the community. I have always appreciated that about being in community banking.”

Though he turned over the reigns of President to Ray in 2004, David has remained as the bank’s CEO. Looking back, he couldn’t be more proud. And as he puts it, he’s still got plenty to learn.

“To be honest with you, until the 50th anniversary came up, I didn’t realize I had reached it,” David said. “Coming to PointBank was a chance to come home, and my greatest accomplishment so far has to be watching the growth of PointBank and being able to help people.”

Feature on The Ambition Project Show

January 2017 Episode 30:Entrepreneurs’ Most Valuable Resource – The Community Banking Relationship “On this episode of The Ambition Project Show, PointBank’s president, Ray David, Jr. sits down with Deirdre Sanborn and shares some of the hidden benefits of working with a community bank. He also details the differences between a community bank and a big bank as part of a series created especially for business owners who are seeking alternative ways for funding and growing their business. Find out more how a community bank can help you and your community.” 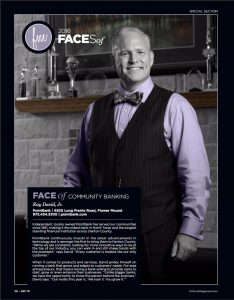 December 2016 Independent, locally owned PointBank has served our communities since 1881, making it the oldest bank in North Texas and the longest standing financial institution across Denton County. PointBank continuously invests in the latest advancements in technology and is amongst the first to bring them to Denton County. “While we are constantly looking for more innovative ways to be at the top of our industry, you can walk in and still shake hands with the president,” says David. “Every customer is treated like our only customer.” When it comes to products and services, David prides himself on running a bank that grows and adapts to customers’ needs. For area entrepreneurs, that means having a bank willing to provide loans to start, grow or even enhance their businesses. “Unlike bigger banks, we have the opportunity to know the person behind the business.” David says. “Our motto this year is, ‘We loan it. You grow it.’”

Officials for the bank say sky’s the limit in budding relationship with university Denton, TX (January 12, 2017) – PointBank, a family-owned community bank with more than 135 years of faithful service in Denton County, was honored on November 10th at a reception hosted by the University of North Texas’ North Family Business Association student group, in conjunction with the College of Business, as the Student’s Choice Family Business of the Year.

The event signifies a budding relationship between the bank and university. Ray David Jr., who succeeded his father, J. Raymond David Sr., as PointBank’s president in 2004, said, “We were absolutely blessed to have the opportunity to be recognized for this award. What makes it special is the fact we were chosen by a wonderful group of students who clearly have a desire to learn and be just as much a part of the fabric of this community as we do at PointBank. We are humbled.”

The Family Business of the Year award is presented annually to a local family-owned business that exemplifies success and what it means to serve and be an active member of the community. J. Raymond Sr. spoke on behalf of PointBank to a crowd of family business owners, UNT College of Business faculty and students about what has made PointBank a successful family-operated business in North Texas.

PointBank has been a staple of Denton County since 1881 when it was then known as Pilot Point Bank. The David family has operated the longstanding financial institution since 1981, and its motto of treating every customer like they are the only customer exemplifies their commitment to service. Each year, PointBank employees – including the David family – hold themselves accountable by volunteering their time for a variety of charitable organizations. This includes the company’s annual golf tournament, which is fast approaching its 30th year and benefits local charities.

In an effort to further deepen its relationship with UNT, PointBank and the College of Business are working together to provide students with opportunities to apply what they are learning through case studies, interviews, and community events. PointBank intends to act as a resource and sounding board for the students in any way possible. “We want to make our company available for these students,” said Aaron Benedict, PointBank’s Regional Branch Manager for Denton and Lake Cities. “I’d like to think these students chose us for this award because we engaged with them and we have shown we want to further that partnership.”

Our Experienced Staff is Here to Help

The calculations given by the loan calculator tool are only a guide. Please call your banker for more information. 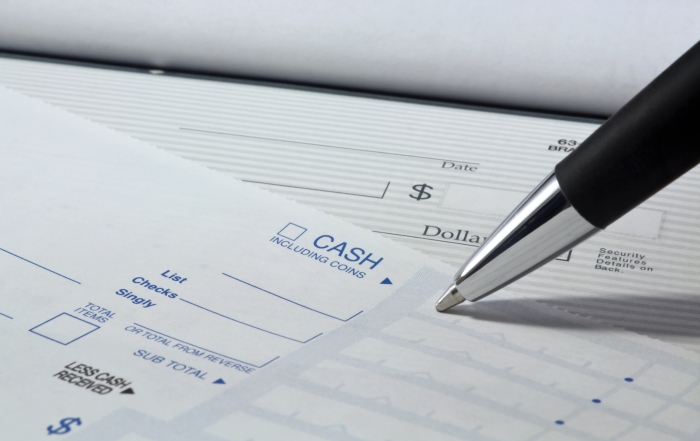 PointBank’s strong financial foundation provides us with the lending power we need to help you meet all of your loan needs, and with our long history as the expert Denton County community bank, our deep roots in Denton County, and our local decision-making, you will find us to be flexible and responsive to your loan needs. If you have questions or are ready to get the loan process started call, email, or stop by one of our branch locations today. 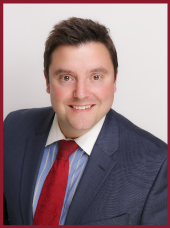 Or Call Us Today

Please fill the form out below and one of our bankers will get back to you as soon as possible.

Please DO NOT send any personal information via this form. This includes Account Numbers, PINs, Social Security Numbers, etc.

We use cookies on our website to give you the most relevant experience by remembering your preferences and repeat visits. By clicking “Accept All”, you consent to the use of ALL the cookies. However, you may visit "Cookie Settings" to provide a controlled consent.
Cookie SettingsAccept All
Manage consent

This website uses cookies to improve your experience while you navigate through the website. Out of these, the cookies that are categorized as necessary are stored on your browser as they are essential for the working of basic functionalities of the website. We also use third-party cookies that help us analyze and understand how you use this website. These cookies will be stored in your browser only with your consent. You also have the option to opt-out of these cookies. But opting out of some of these cookies may affect your browsing experience.
Necessary Always Enabled
Necessary cookies are absolutely essential for the website to function properly. These cookies ensure basic functionalities and security features of the website, anonymously.
Functional
Functional cookies help to perform certain functionalities like sharing the content of the website on social media platforms, collect feedbacks, and other third-party features.
Performance
Performance cookies are used to understand and analyze the key performance indexes of the website which helps in delivering a better user experience for the visitors.
Analytics
Analytical cookies are used to understand how visitors interact with the website. These cookies help provide information on metrics the number of visitors, bounce rate, traffic source, etc.
Advertisement
Advertisement cookies are used to provide visitors with relevant ads and marketing campaigns. These cookies track visitors across websites and collect information to provide customized ads.
Others
Other uncategorized cookies are those that are being analyzed and have not been classified into a category as yet.
SAVE & ACCEPT